Part 1 “Fortean Diary”: Do you crap your pants when you see a ghost? 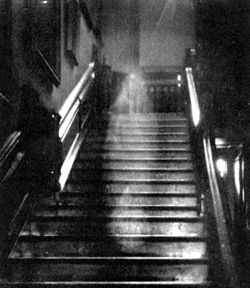 I am a skeptic and avid investigator of so-called “Fortean” phenomena and conspiracies. I am a former accountant and a current member of MENSA and have been gifted with an eye for detail. I’m also bored and am looking for a way to fill my time. Anyone who is interested in sharing their story or who needs an investigator don’t hesitate to contact me.
My name: Dr. Frank Birnard.

The question is a pertinent one: if you ever saw a ghost, would you shit your pants? This question can be unpacked in two ways: either you are the type of person, when confronted with unexplainable phenomena, to react in fear, and thus ensues the whole physiological chain reaction that results in your rectum opening up like a dam to let loose the smelly result of your energetic fright. Or you are the type of person whose rectum reacts quite the opposite; that is, your rectum tightens up so tight that, as Ferris Bueller pointed out, if a piece of coal were inserted prior to said event, the force of your ass-as-crucible would be great enough to render that piece of coal a diamond.

That was the question I wondered myself when I first started my exploration of the unexplained phenomena, the Fortean phenomena that “legitimate” scientists conveniently overlook. I consider myself to be a brave soul, but is bravery enough? Would my body betray me in that moment of truth? Which of the three reactions to a supposedly terrifying event such as a ghost encounter would I choose: freeze, flight or fight? And would I have shit my pants in any of those situations? And the ultimate question: would my mind be focused enough in pursuing my goal to control my weak and fragile body? Or would my mind be my ultimate betrayer?

The client, a woman (who shall remain unidentified) who called me after seeing my advertisement, narrated her tale to me in a voice that was confident enough in her ability to call me, but shaky and in parts even close to tears when the more unimaginable details of her experience were disclosed. I listened patiently and was able to tease out the pertinent facts. In dealing with clients a paranormal investigator must always be patient as that is the nature of the job. Investigation in general is a trying and frustrating process, much like mining for gold (which I did in my younger, stupider days), where you sift through the unimportant details to get to the facts. Well, first you must sift through the prank phone calls (bored suburban youths with nothing better to do with their time than waste mommy and daddy’s phone bill on 1-800 numbers) and the quote-unquote “crazies” (one woman claimed she heard my voice through her radio although I am quite sure my voice is not recorded anywhere or broadcast on anything); and then when you get something like a legitimate case, the scientific, or rather methodological, process begins of determining if the potential case can be explained within the context of orthodox, predictable and vanilla Life…or if the case is a Case. In this case (ha!), I believe the woman’s tale to fall in the latter category.
The details were thus: a typical poltergeist case, the woman moved into a beautiful tenement that had suspiciously cheap rent. The woman claimed the building manager had told her the reason for the cheap rent of the apartment was due to the close proximity of a rendering plant, but the woman, noting the absence of the unmistakable stench of boiling pig fat, took it as a sign of fate and signed the lease on the spot. However, after a few weeks of small incidents, building in intensity from a few moved small objects of personal affectation, such as the woman’s ring inherited from her deceased grandmother and small knick-knacks picked up from her travels from around the world, then to more deliberate and bigger objects, such as moved furniture and lights turning on and off by themselves, the woman could no longer claim the disturbances on so-called “natural” explanations and sought more unorthodox resources to explain and thus eliminate the disturbances. The straw that broke the camel’s back was a feeling one night when the woman was in bed, of a “presence” sliding beside her and stroking her hair. Half-asleep, the woman claimed the “presence” felt like her ex-husband and she immediately relaxed and even hummed in delight at the “presence”; but then, once in her brain she realized her ex-husband was now remarried and lived in another part of the country, she awoke with a start and realized to her horror that the “presence” was still there…breathing on her neck. She screamed and ran to the bathroom and locked the door and would not leave until daylight. After which, after exhausting more local resources, she discovered my ad and contacted me.
I did not ask her if she shit her pants. More on this case to continue.
detective fortean fortean phenomena ghosts investigation investigator paranormal spiritual